In signal processing, the need sometimes arises to nudge or fine-tune the sampling instants of a signal by a fraction of a sample. An FIR Farrow delay filter is typically employed to achieve this task, and may be combined with a traditional integer delay line in order to achieve a universal fractional length delay line.

A Fractional delay based on an FIR Farrow structure may be defined as:

Which produces a fractional linear delay of \(\alpha\) between 0 and 1 samples. However, a more universal building block can be achieved by combining the Farrow delay structure with an integer delay, \(\Delta\)

The plot shown below shows the magnitude (blue) and phase (purple) spectra for \(\Delta=9, \, \alpha=0.52\). As seen, the fractional delay element results in a non-flat magnitude spectrum at higher frequencies. 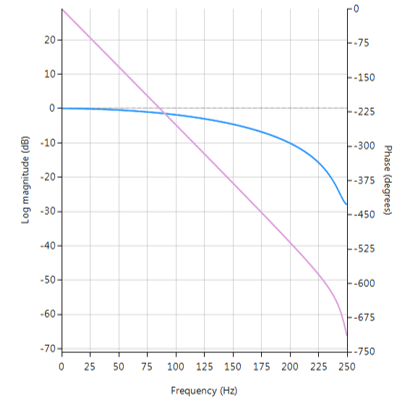 A Farrow delay filter may be implemented in ASN FilterScript as follows: